Oil Refinery Economics: How a Shortage of Refineries Cause an Increase In Gas Prices 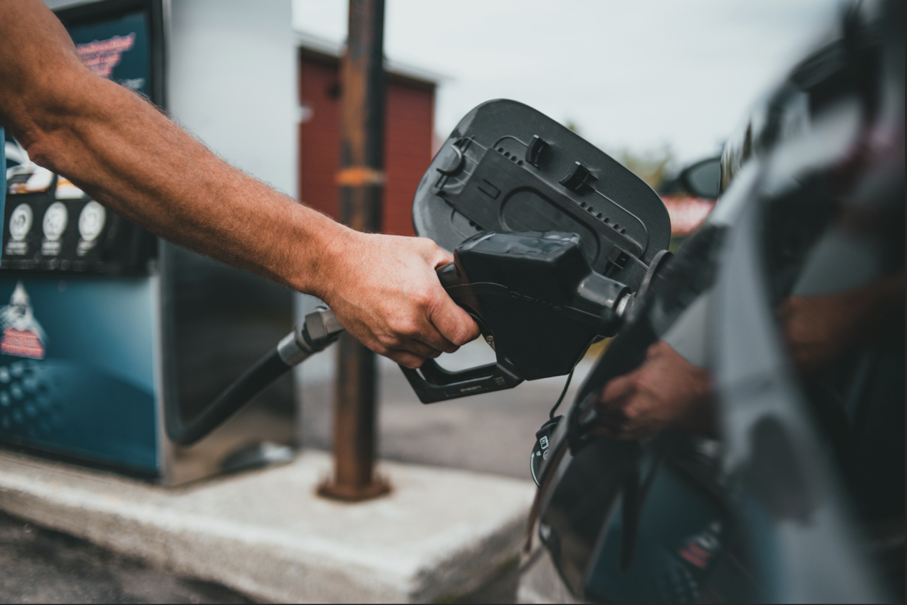 With the exception of a small refinery launched in North Dakota in 2014, no new oil refineries have been built in the United States since 1976. In 1972, Richard Nixon formed the Environmental Protection Agency (EPA), charged with restoring the environment to its "original pristine state." As oil refineries are material polluters, the EPA did not take kindly to their existence. As a result, oil refining joined a list of any number of industries that exported their pollution by building plants abroad and taking factory jobs with them.

While the usual reason for outsourcing was cheaper labor, often such rationale was an excuse to escape American environmental laws. For the average company, direct labor costs come to less than five percent of the cost of production. Factors such as cost of transportation, inputs, taxes, and environmental regulation are usually far more significant factors in the price of producing an item. These elements of refinery economics have a huge impact on what we pay for gas. Marry this with the NIMBY (Not in my backyard) movement, and you have an impetus not to build oil refineries in America.

Oil companies have spent the past half-century increasing the efficiency of existing plants because of local opposition to new facilities. This increase can only go so far on the limited amount of land. In 2019, the oil industry shut down about five percent of domestic refining capacity as demand fell off a cliff in the early days of COVID. Most of the closings were among smaller refineries lacking economies of scale to be as efficient as the larger facilities. That capacity is probably gone forever. 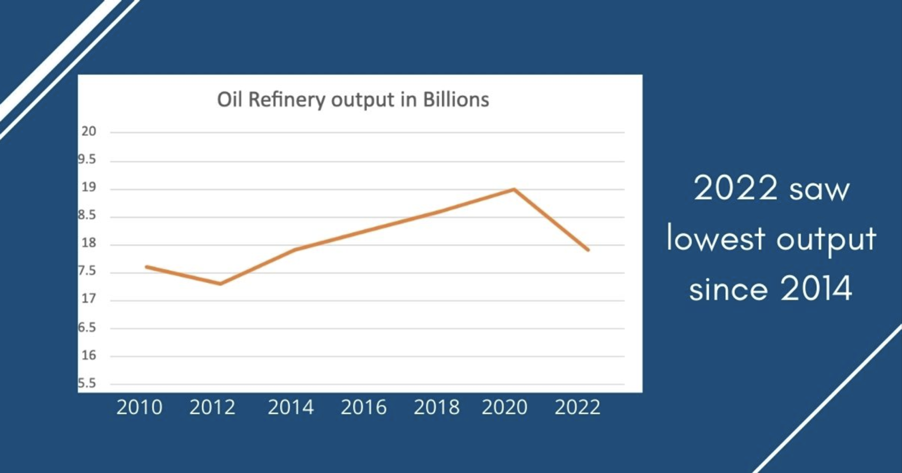 Economics 201 – Finding equilibrium: A decrease in refineries’ supply leads to an increase in price

The truth is that restarting a refinery is not easy and takes a good bit of time and money. Any crude oil left in the pipelines turns into sludge after a while. Restarting a refinery requires that most pipes be dismantled, cleaned out, and reassembled. In addition, there is the matter of finding workers to staff the facility, most of whom have retired with the shutdown. Petroleum engineers are highly skilled and not easy to come by.

The position of the Federal Government on this issue is, at best, inconsistent. It can best be described as someone trying to drive with a foot on the accelerator and the brake simultaneously. On the one hand, the President accuses "big oil" of profiteering by letting prices get too high and threatens the industry with an excess profits tax in the manner of Jimmy Carter in an earlier era. On the other hand, the government wants the industry to spend more to expand production (including refining production), including building the refineries that the EPA likes to cite.

The fact of the matter is that, with a few exceptions, all net new refining capacity in the world has been concentrated in four countries: China, India, Russia, and Saudi Arabia. Russia is off limits due to Ukraine, and India's capacity is almost entirely spoken for by its own economic growth. Saudi Arabia's new refining projects are only now coming on stream. Output has primarily been earmarked for Europe to replace Russian jet fuel and diesel. China has excess capacity due to its COVID lockdowns. It would perhaps be asking too much to expect them to help an American administration that cites them for human rights violations every chance it gets.

Then there is the government's love affair with electric vehicles (EV). There is not only a lack of electrical capacity but also a grid system to deliver the electricity where it needs to go; the government promotes the EV as the car of the future. The total vehicle market is mature. EV will need to take market share from gasoline and diesel vehicles to succeed. A new refinery requires forecasting profits 15-20 years out. How can an oil executive do so when the government actively promotes the industry's demise with tax credits for EV purchases?

A final note: LyondellBasell Industries operates one of the country's largest refineries in Houston, Texas. They have announced they would like to exit the refining business, buying feedstocks from others rather than making the raw materials themselves. The problem is that no buyers have come forward. The company has announced that they will shut the refinery down if they have no buyer by the end of 2023. LyondellBasell makes about two percent of the gasoline refined in the United States.

Economic activity has remained strong as a shrinking workforce continues to meet strong demand in most areas. Unemployment has stayed stable, and wage growth has proceeded apace. Thus, two recession factors, increasing unemployment, and falling wages are not present.

Both residential and non-residential construction is due to expand. Housing has not seen the present demand gap since the end of World War II. Infrastructure is expected to get a boost from Federal Programs. Auto productions need to accommodate almost two years of pent-up demand due to the semiconductor chip shortage. Any demand decline won’t be until 2023, if that.

Inflation: What is affected by inflation

Inflation continues to be skewed to food and medical care, which fall most on the lower economic classes. The good news is that we are close to lapping the increases of the past year. Once this is done and inflation no longer continues at its original trajectory, we should see a decline in the inflation rate. My best guess at this point is three to four percent year over year by the fourth quarter.

For all the complaints about inflation, much of the effect of prices of imports has been blunted by the strength of the dollar relative to foreign currencies. As it takes more Euro, Pound, etc., to acquire a given number of US dollars, domestic buyers are rewarded with better prices than previously. Just ask any tourist traveling to Europe. This also means countries with weaker currencies must pay more for dollars than previously. This is one of the causes of domestic unrest in many parts of the world.

Interest rates are destined to go higher. This is due to establishing an interest rate higher than the forecast inflation rate of 4-5 percent.

High-interest rates are also needed to continue to attract foreign funds into the US to maintain a strong dollar. If the dollar were to fall, the US would effectively be importing other countries' inflation.

As usual, the market is being pulled in several directions. On the one hand, the strength of the domestic economy would argue for its appreciation. Offsetting this is the fact that not all stocks that were bid up in the last upswing have come back to earth. The cryptocurrency mania is also a mitigating factor and will continue to be so until it flames out. Companies in need of borrowing funds to expand are especially vulnerable.

Price corrections have, in some cases, been pronounced. So long as you do not need to sell, you can wait and pick up bargains while waiting for more rational minds to assert themselves.